So, with a bit of extra downtime this summer, Sydney found a new hybrid challenge to conquer during training. She learned that just a few weeks ago, Lauren Johnson set the female world record for the fastest mile while dribbling a basketball with a time of 5:16.36. Ready to compete, Sydney decided to give the record a shot herself.

"The challenge of balancing basketball and running throughout my athletic career is what inspired me to break the record," Sydney said. "I wanted to have fun by combining two things that I love to do that have shaped me into who I am today."

Sydney's attempt to break the world record was an instant success. She finished with a time of 5:08.57. You can watch the full video here.

Looking forward to the start of cross country, Syndey has a positive outlook: "My goal this upcoming season is to improve my times on all of the cross country courses that I am able to run...If Footlocker Nationals doesn’t get canceled, I would love to get back there again because that race is so much fun and would be an amazing ending to my senior cross country season." 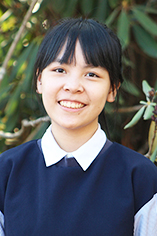