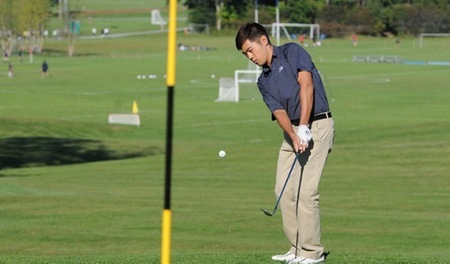 Described by coach Jake Smith, Young Jun “Joe” Ko ’14 is a “naturally talented competitor and always carried himself in a calm, cool and collected manner.”  These attributes helped to make Joe one of the most talented golfers at Marianapolis.  During his time as a Knight, Joe was a two sport athlete participating in basketball and golf.  Successful in both, Joe really made a name for himself on the golf course placing in 1st place in the SENE golf tournament in 2014.  When he wasn’t playing golf, one could find Joe working on his studies or enjoying his time as a boarding student.  His hard work in athletics as well as academics helped him to get into the prestigious Middlebury College where he is studying Economics as well as being a member of the men’s golf team.  In his time at Middlebury, he has helped the golf team place 2nd in the NESCAC tournament (2017) and qualify for the NCAA tournament (2015, 2016).  Joe’s success in golf and school are well deserved. Knight Nation caught up with Joe and asked him about his fondest memories at Marianapolis as well as his plans for after college.

How did Marianapolis prepare you for the rigors of life after high school?
Marianapolis was the first time I was truly independent and away from home. Taking the extra year to complete my PG year definitely helped me tackle my responsibilities in college. I was much more familiar with my environment and I was able to keep my "head straight".

What are your greatest memories from your Marianapolis playing days?
The camaraderie between my teammates. The relationships formed were especially meaningful because we would interact and engage with one another by living together in the dorms.

Who were the coaches that had the biggest impact on you during your Marianapolis days?
Jake Smith and Andrew Vitale were two of my coaches at Marianapolis who really helped me grow and mature as a person.

Greatest moments playing in college?
My sophomore year when we won our league conference; junior year, when I won The Ekwanok Tournament, and this year when I placed 3rd overall out of 115 players at our home tournament: The Duke Invitational.

What is it you are looking forward to this upcoming season?
Winning our league conference and going back to nationals.

Major and plans after college?
Economics major, and planning on attending law school.

What advice would you give your high school self?
Enjoy the moment, be patient, and make meaningful relationships.