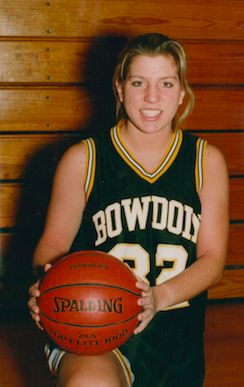 Stacey (Baron) Ardini ’95 was a fixture in the classroom and on the basketball court from her first day at Marianapolis.  As a four-year varsity basketball player, Stacey helped to make Marianapolis girls’ basketball a team that others feared.  By her senior year her team was able to take the QVC Division II League Title and participate not only in the QVC Tournament, but also the CIAC State Tournament. Stacey was named a QVC First Team All-Star as well as earned the “Coaches Award” as a senior captain.  Stacey’s stellar basketball career was capped off when she joined the 1,000-point club and decided to take her talents to Bowdoin College.  There, she continued to be a leader and by senior year was named captain for the Polar Bears as well as helped her team make it to the NCAA tournament for the first time in program history.

Stacey demonstrated what a true student-athlete was.  By her senior year at Marianapolis, she was a member of the National Honor Society as well as a three-sport varsity athlete.  She was named valedictorian or her class as well as earned the prestigious Marianapolis Alumni Merit Award, which is given to the graduate who best exemplifies the ideal of Marianapolis. She continued her education at the highly esteemed Bowdoin College before attending Boston College Law School. Knight Nation was able to catch up with Stacey as she reflected on her time as a student-athlete as well as keeping us up to date with her life.

How did Marianapolis prepare you for the rigors of life after high school?
Marianapolis not only prepared me for the academic rigor of college, but it gave me a great foundation for everything after and maybe, most importantly, lifelong friends.  My interests in history and politics, which ultimately led me to a career in law, were fueled by many lively classroom and campus discussions with the likes of Eric Gustavson and Keith O'Hara.  At an impressionable age, the diversity at Marianapolis taught me to celebrate and embrace people's differences and things like trips to the homeless shelter in Hartford with Bob Edgar ingrained in me the importance of caring for and being kind to others.  All in all, as I like to say, Marianapolis was the best decision Stephanie (my big sister) ever made!

What are your greatest memories from your Marianapolis playing days?
Marianapolis in the 90’s was all about basketball, albeit the boys’ basketball team!  The girls team wasn't winning as much and never had as many fans, but we certainly had our own fun and sense of community.  My greatest memories are not particular games, but rather hundreds of practices, bus rides and trips to McDonalds all over CT, playing with my sister and dear friends, and generally feeling like I was part of a really great basketball family.

Who were the coaches that had the biggest impact on you during your Marianapolis days?
The legendary Jim Mead of course.  The guy could yell, sweat, and yell some more.  But he cared and he taught me so much about the game, about how to get yelled at (!), and about discipline, respect, and never giving up.  He was the best.

Greatest accomplishment since leaving Marianapolis?
I am blessed with three awesome kids (Maggie, 6; Allison, 4, and Jack, 2) whom you may occasionally see running around Marianapolis with my dad, and a wonderful husband Drew.  We live in a town we adore close to Boston in a house built in 1825 that is close to our jobs that we enjoy.  Life is good!

Greatest moments playing in college?
At Bowdoin, I again was lucky to have amazing coaches and teammates who are lifelong friends.  Making the NCAA tournament my senior year for the first time in the school's history was really special, as was captaining the team my senior year.  I love getting together with my teammates at our lake house in Webster every summer.  It's a wonderful tradition.

What advice would you give your high school self?
I have very few regrets but one of them does date back to my high school/college years.  Ditch the internship and go to the Vineyard.  One summer many years ago, half of my MPrep friends went to the Vineyard and got jobs scooping ice cream and waiting tables; the other half got internships in Boston at law firms and tech companies.  All of us are doing just great right now, and while those of us in Boston had a great time in our own right that summer, I always have wished I had taken that fleeting opportunity to just scoop ice cream and sit on the beach for a summer.

Do athletics still play a role in your life?
I coach my daughters' YMCA biddy basketball team.  And truth be told, Mommy is likely having more fun than they are!