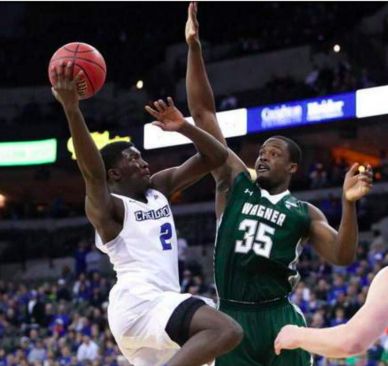 Not many people can say that they played athletics at the division 1 level. An even smaller number of people can say that they were a division 1 two-sport athlete. Gregory Senat ‘13 is one of the few that can say that. During his time at Marianapolis, Greg focused on basketball and getting a scholarship to play at the next level. In his two years at Marianapolis, Coach Andrew Vitale states “He was one of the most hard working players we have ever had. He worked extremely hard on his game and to develop his body into a D1 big man body”. As important as he was on the court, he was equally valuable in the community, especially the dorm. Coach Vitale commented that “he was loved by all the guys and dorm parents”. Greg’s hard work paid off as he earned a basketball scholarship to play at division 1 Wagner College.

In his freshman year, Senat saw time in 21 games. Sophomore year, he played in 29 out of the 31 games, averaging 3.9 points per game, and 4.3 rebounds per game, and was elected to the National Association of Basketball Coaches “Good Works Team”. His junior year, he played in all 32 games and earned the honors of being on the NEC Winter Academic Honor Roll. In his senior year, Senat decided to go out for the Wager football team. He made the team as a right tackle and started in all 11 games. As his senior year basketball season is getting underway, Knight Nation wanted to recognize Greg.

What are your greatest memories from your Marianapolis playing days?
My greatest memory from my playing days would be my senior year against Tilton when we made the playoffs and the gym was completely packed, standing room only. My teammates and I had worked so hard to get to that point that year and made the playoffs for the first time in a long time for Marianapolis.

Who were the coaches that had the biggest impact on you during your Marianapolis days?
All of my coaches at Marianapolis had a great effect on me. I wouldn't have been able to make it through those two years without them. Coach Dave, Coach Andrew Vitale, Coach Ray Cross, Coach Trevor, and Coach Charbel all helped me to be successful.

Greatest moments playing in college?
One of the greatest moments playing in college was this year defeating the number 18 ranked college in the country Uconn the first game of the year was unreal! Also this year I decided to play football for the first time since my sophomore year of high school and and started at right tackle the entire year, and our team finished third in our conference after finishing last the previous year.

Major and plans after college?
Well if I keep working hard, God willing, I'll be able to go play professional football one day. However if that does not work out, I plan on getting into the medical field.

What advice would you give your high school self?
I would tell my high school self that high school is only four years and there's way more life after you graduate. The problems that you experience in high school feel like they'll never end but I'm here to give you confidence that it all works out for the better. Just remain humble and hard-working and treat people with respect.