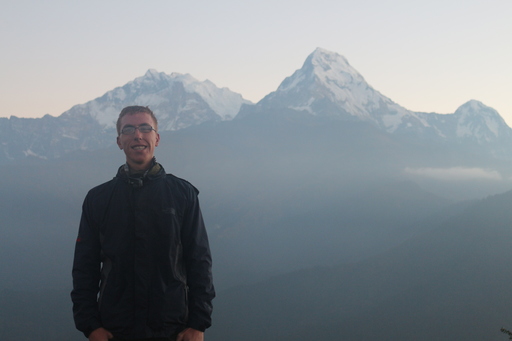 Unlike his other Marianapolis classmates, Ben Mandile ’15 didn’t head off to college this past fall. Instead, he was in Kathmandu, Nepal rebuilding homes destroyed by an earthquake.

“Nepal was just kind of a spur of the moment idea,” Mandile said. “I grew up traveling the United States a lot and have always enjoyed traveling. I was just guided by an unknown guide.”

In April of 2015, a magnitude 7.8 earthquake hit central Nepal killing thousands and demolishing over 500,000 homes. It was estimated by the UN Development Programme to cost $175 million to reconstruct the homes.

Mandile spent August through early December in Nepal volunteering with All Hands, an American Non-Profit NGO, which has projects around the US, Dominica, Malawi, and in the Philippines. As part of All Hands, Mandile served as a Team Leader for a wire team on a project called 50 Homes, building temporary houses for the people of the Halchowk district of Kathmandu.

“They are temporary because the Nepali government will not allow us to make permanent homes,” Mandile explained. “We build everything for them except the bricks on the bottom half.”

Mandile explained that Kathmandu was more fortunate than other areas that were hit by the earthquake, and entire streets were completely ruined in neighboring areas.

Following his time in Nepal, Mandile plans to continue traveling until he begins college at Fort Lewis in Durango, Colorado where he plans on studying Adventure Management to become a trekking guide.  He was originally enrolled at Florida Atlantic University, but his time in Nepal changed his path.

“One thing I learned in Nepal is to have an open mind so my plans may change again someday,” Mandile said.

Mandile would also like to work in humanitarian aid or disaster relief.